I have a problem with my teeth falling out. I want to replace them and am determined to do better with my teeth. I hear dental implants are the best. Can I get those or do I need something else in my situation?

This means your first goal is getting your gum disease treated. It will require some extra appointments for a while. The good thing this is, once your gums are healthy you’ll then be a candidate for the implants.

Until then, you can get removable partial dentures to help fill in the gaps in your smile. You can do you periodontal treatments at the same time.

The Danger of Facial Collapse

When your teeth came out your body recognized that. Usually, the roots of your teeth signal to your body the jawbone is important. When those are no longer there, your body reabsorbs the minerals in your jawbone thinking they would be more useful elsewhere.

As those minerals are put to use in other parts of your body, your jaw begins to shrink. Eventually, you don’t have enough jawbone left to support your dentures.

Fortunately, once you are able to get dental implants, your body recognizes the implants as teeth roots and keeps your jawbone firmly intact.

First priority is to get those gums healthy. It’s great that you are willing to work so diligently on your oral health.

I had a set of porcelain veneers done about 7 months ago. I liked them, but I’ve been having some problems and I’m wondering if the porcelain veneers are why. It didn’t happen until after I got them. It started with the gums feeling sore. I thought that might be because I had new veneers. Then I noticed occasional bleeding when I brushed. I went in for my first checkup since getting them and they’ve said I’m developing gum disease and I need to do a better job brushing. Here’s the thing, I’m pretty fastidious when it comes to brushing and flossing and haven’t changed my habits. That’s especially true because I invested all this money in my veneers and want to keep them clean as well. So, if it isn’t me, is it the veneers? Is this common? Is there a solution? 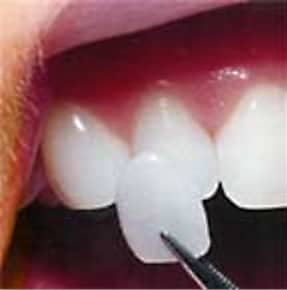 I’m sorry you’re going through this. If your oral hygiene is sound, then something else is going on. Because this started after your porcelain veneers procedure, it is natural to suspect them. However, they do not cause bleeding gums or gum disease. What can do that is the porcelain veneers not being properly placed.

It sounds like your dentist doesn’t understand how to get them flush against the teeth. When this happens, it causes a little shelf between the porcelain veneers and your gums. This is known as bulky margins and is a huge problem for you.

Here’s the thing. when you have that shelf, food and other forms of bacteria get trapped in there. They’re very hard to get out. This leads to decay. It will ruin your porcelain veneers and your teeth. You don’t want to go from a porcelain veneer to a porcelain crown unless you have to.

Get Your Porcelain Veneers Re-Done

This has to be replaced. Fortunately, if you can get another dentist to verify that is the problem, you can get your original dentist to replace them for free. The key to getting a good second opinion though is two-fold.

First, never ever tell them who did the work. Dentists are colleagues and friends. It’s hard to say something negative about a peer. If they don’t know who the dentist is it takes away the feeling of disloyalty. They’re just giving an honest, unbiased opinion.

Second, is don’t tell them what you think it wrong. Just tell them the symptoms and let them make the diagnosis. If it turns out to be bulky margins, he can help you get that refund you need to get this fixed properly.

I’m really disappointed right now. I’d been looking forward to getting my teeth re-done for a while. I’ve always wanted a pretty smile. I’d been saving up for four years. When I finally was sure I had enough, I went to my dentist. He said porcelain veneers don’t work and what I should get is dental crowns. I don’t want to get those. I have perfectly healthy teeth. Plus, I’ve seen some patients who’ve had crowns at my clinic and I’ve never been impressed with how they’ve looked. It’s not what I was hoping for with my new smile. Do porcelain veneers work?

Your dentist is wrong. Porcelain veneers work. In fact, they are the go-to procedure when you want a beautiful smile makeover. My suspicion is the reason your dentist is trying to steer you away from this is his lack of experience.

Doing smile makeovers isn’t something taught in dental school. Instead, a dentist needs to invest post-doctoral time studying them. In fact, the best dentists will always keep up with their field. You definitely don’t want a dentist who does the bare minimum of their required continuing education. You want a dentist who is passionate about their field and keeps up with the latest developments.

Getting Your Smile Makeover

If you want a beautiful smile, you’re going to have to go to a different dentist– one who has invested time studying cosmetic dentistry.

The trick here is there isn’t a recognized specialty in cosmetic dentistry, so anyone who calls themselves a cosmetic dentist is simply a general dentist who offers cosmetic services.

So, how do you separate the ones who do a good job from those who just get average (or worse) results? I’d start by looking at their smile gallery. This should be a page on their website which has before and after pictures of cases they’ve done. You may want to call and double check they’re showing cases the dentist has done and not just stock photos, though.

If you don’t like what you see there, move on. If you do like the type of results they get, take one additional step. Check their reviews. It’s always helpful to see what patients who have actually been to their practice think of the experience.