Living in the affluent East Cobb area not only provides our young adults with many cultural and educational opportunities but also, unfortunately, easy access to drugs and alcohol, the use of which can wreak havoc on the teeth and gums (not to mention the brain and the rest of the body!) There are many drugs that can have such deleterious effects, but I’ll focus on three more common ones among teenagers: alcohol, marijuana, and methamphetamine.

Alcohol users are at greater risk of developing cancer in the mouth, throat and esophagus – as well as having tooth decay from the increased exposure to sugars and acids within the drink and from the drying effects of the alcohol on the oral tissues. People with alcohol abuse problems have been shown to have a higher incidence of periodontal disease, tooth decay and potentially precancerous oral lesions.

Marijuana abusers generally have poorer oral health than non-users, with an increased risk of cavities and periodontal disease. Marijuana smoke acts as a carcinogen and is associated with pre-malignant lesions within the oral tissues. Users are also prone to oral infections, possibly due to suppression of the immune system. 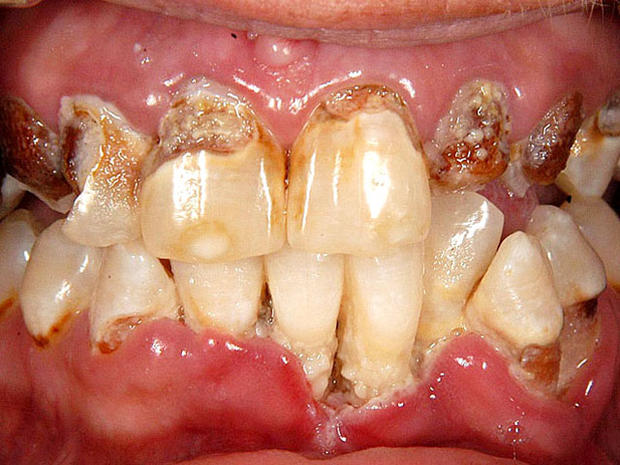 Methamphetamine users are known for having “meth mouth” – severe decay and erosion of the teeth. The oral problems all start with the way methamphetamine is manufactured. The primary compound is anhydrous ammonia (farm fertilizer), along with lithium (from batteries), and lighter fluid, as well as other ingredients which are very acidic causing aggressive erosion of enamel, damage to the gum tissue, and destruction of dental restorations. The acidic nature of the drug causes dry mouth which leads to tooth decay – in a distinctive pattern often seen on the smooth surfaces of the teeth and the in-between surfaces of the front teeth. The rampant decay seen in “meth mouth” can also be attributed to lack of a user’s concern about oral hygiene combined with teeth grinding and a craving for carbohydrates and sweets. Meth causes the vessels that supply blood to oral tissues to shrink, and the reduced blood supply causes tissues to break down and die.

Alcohol, Marijuana, and Methamphetamine are dangerous drugs for people of any age,
but teenagers are still developing physically. The developing body is much more
sensitive to the effects of drugs. And drug and alcohol use change the priorities of a
person’s life. Instead of caring for their health, most users spend their time caring for
their drug habits. Unfortunately, many teenagers believe they are in control and do not
see their drug use as a problem. Your teenager’s dentist may be the first healthcare
professional to notice potential drug abuse by observing changes in the condition of the
mouth during a dental exam.